Find the chords & lyrics for ‘Octopus’s Garden’ here.  There are four chords, but with a little practise it is easy to play. The chords are C, Am, F & G7.

To get an idea of how the song sounds take a look at the video in this post.

To view our other videos visit our YouTube channel ukulele 4 kids.

View our other song chords page.

Let me know what you think, and I hope you enjoy playing it.

Octopus’s Garden by The Beatles

I recently purchased the book ‘Ukulele for Kids – A Beginner’s Guide with Step-by-Step Instruction for Ukulele’. I can assure you the book wasn’t written by me, but by a much more accomplished ukulele player/author by the name of Chad Johnson and published by Hal Leonard.

What lessons does the book cover?

The book uses a range of popular songs to support each of the above lessons. Songs are included by artists such as:

The book also has a CD with 30 tracks for demonstration to help with the above lessons.

Who Is It Suited For?

The book would be a good starting place for teachers or parents who want to teach not only kids how to play, but themselves too.  I’d also recommend it for kids from about 10 years of age who want to  teach themselves how to play the ukulele.

The only small complaint I have about the book is that it does not have a contents page. This would make it easier to go to various parts of the book much more quickly.

Is it worth buying, and where can I buy it?

Yes it is. Its list price is US $12.99, and can be bought at various online sites like Amazon and Fishpond (NZ) The book gives ukulele beginners a good grounding in learning how to play the ukulele. Once you know how to play you are on your way to playing a whole range of songs.

Ukulele and the Punk Revolution

The idea of ukulele, kids and punk is a combination Ukulele 4 Kids hadn’t considered. So I was quite interested to find out more. 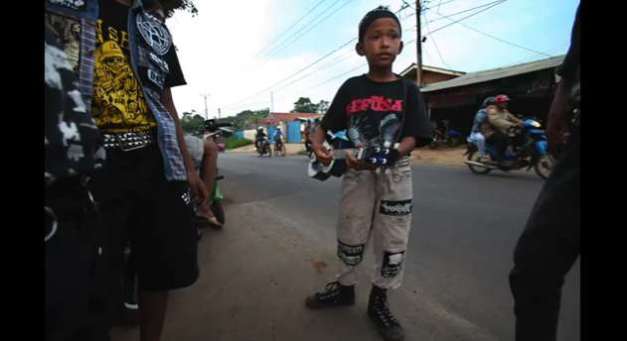 Maria Bakkalapulo recently contacted Ukulele 4 Kids to share information about a documentary she is making in Indonesia. She describes a musical movement spreading through Indonesia. It’s a punk revolution led mostly by street kids, who mainly use ukuleles to spread their message of change.

Anyone taking a taxi cab in Jakarta , stuck in a traffic jam, will have noticed ‘street kids’ coming up to the window appealing for money, often playing ukeleles and singing. Offering a few dollars worth of currency might leave one wondering –  ‘is this going to make a real difference?’

In Jakarta, there’s a punk rock movement that established itself over a decade ago. Marjinal is one of Indonesia’s original punk bands. The band quickly became popular because their songs offered hope for kids with few opportunities. Their film, Jakarta Punk: The Marjinal Story, is their way of spreading the message of change for those who cannot easily help themselves.

Punk attitudes gave Marjinal the impetus to demand change against frightening odds. On the streets of Jakarta in the late 1990’s, mass public protests brought about the end of authoritarian rule by then President Suharto. But Indonesia still has many social ills to heal, with around 50% of the population still living in poverty. Marjinal continues to sing about the injustices and corruption they see every day. Punk and its radical attitude is a cry from the streets.

The documentary has Marjinal at its core. It tells their story, as the voice of the street kids. Marjinal are inspiring a social and political revolution in Indonesia, helping directly through sheltering these homeless children, and teaching them creative ways to earn money. Punk gives these kids an identity, hope, a family. The documentary looks into the reasons why the punk community is a substitute for family and state support.

At Kapiti Primary School in New Zealand we have two ukulele groups, a junior and senior one. Three teachers work together to teach the junior group, they are Ms Neave, Mrs Eaton and Mrs Nolan. They work with the junior group two lunchtimes a week. Below is a photo of the junior group. 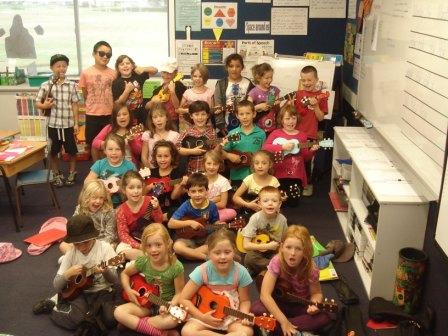 The senior group is taught by Mr Madge (author of this site). He works with the senior group on a Tuesday lunchtime, Wednesday lunchtime with the advanced players and after school on a Thursday. We have been using the Uke ‘n play ukulele for Kids book and CD by Mike Jackson. After two weeks of lessons the beginners in the group can play the C and F chords and five songs! The advanced members of the group are working their way through Uncle Rod’s Ukulele Boot Camp resource. Below is a photo of the senior group.

Play a Ukulele Chord -The A Chord

The next chord we will look at in the ‘Play a Ukulele Chord’ series is the A chord.

Ukulele 4 Kids filmed James Hill sharing how to play the ukulele with chopsticks whilst in Porirua, New Zealand on the 13 March 2012, as part of the New Zealand International Arts Festival.

The next chord we will look at in the ‘Play a Ukulele Chord’ series is the G chord.

James Hill & Anne Davison performed Michael Jackson’s Billie Jean whilst in Porirua, New Zealand on the 13 March 2012, as part of the New Zealand International Arts Festival. In this video James talks about the different parts of how he plays the song on the ukulele, and is accompanied by Anne Davison on the cello. They do a great job together!
If you seen James play this before you’d be forgiven for thinking he may be using loops, but I can tell you from sat in the front row he plays all the different parts. Thanks to both of you for playing here in New Zealand.

The kids in my class at school thought it was great, and can’t wait to see the video I took where he uses chopsticks to play the ukulele – WOW!

The next chord we will look at in the ‘Play a Ukulele Chord’ series is the F chord.